When your dog starts his “back-talking” at you, just turn and leave the room without 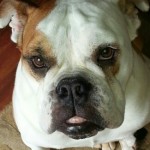 further talking.  Do it immediately (at the first bark), and resist the temptation to repeat your command or “reason” with him.  Go into another area and close the door behind you if possible to make your point clear. After 20 seconds, come back to him for another chance.  Repeat as needed.  Every time.   And abide by my 10 to 1 Rule – Reward good behavior 10 times more than you correct bad ones.  Teach him what to do instead of barking at you, and reward that replacement behavior more frequently than you would like for 7 straight consecutive days.  Pretty soon, he’ll change his mind when his old behaviors do not pay off or aren’t fun anymore.

I was born and raised in California, lived in Pennsylvania for several years, and have recently moved to Delaware. I have gone from being a teacher for 20 years to a blogger and now back to teaching but still blogging. I have a great dog named Simba. Simba is a German Shorthaired Pointer. Life with Simba is an adventure every day. I have had dogs my entire life but I have learned most about dogs living with Simba. German Shorthaired Pointers really do become your best friend. They become extremely attached and that is why they say they have the Velcro phenomenon. Simba now has a sister 8 years younger and her name is Gypsy.
View all posts by Simba's Mom →
This entry was posted in Training Tips and tagged barking, training, training dogs. Bookmark the permalink.
Translate »