The project took a couple of hours of rewiring resulting with happiness and satisfaction. 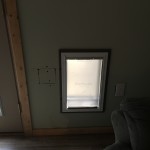 It only took Gypsy a couple of days to get comfortable with going in and out of the doggie door by herself without coaxing.  Simba on the other hand is more apprehensive and always has been.  It took her about a week of going through the door with me holding it open, on my hands and knees on the opposite side of the door with my head through the door as I pleaded with her.  An entertaining  moment for my neighbors who don’t miss anything.

I am glad they have each other to play with.  They usually do a pretty good job wearing themselves out chasing each other around and wrestling like world champions. However, since I have returned from the hospital Simba won’t leave my side.  Gypsy still comes and goes and actually enjoys spending lots of time outdoors trying to find different escape routes.  Simba has always been very intuitive and knows something’s wrong; so there’s no playing or chasing each other around going on.  My son sent us the BazooK-9 that he purchased through Amazon.  What a fantastic and fun contraption, not only for the dogs but me too.  This shoots tennis balls across two rooms with the pull of the trigger and the best part is that you don’t have to bend down to pick the balls up.  All you do is push the barrel over the ball and it scoops it up. When the ball disappears into the barrel Simba just goes insane trying to figure out where it disappeared to all the while making a funny and dramatic whimper cry. Gypsy has never gotten the jist of fetching.  She likes chasing the ball and then prancing around with it in her mouth chasing Simba back and forth who does fetch and return the ball.  They both love it and are getting quite the exercise.  They love it so much that they don’t want to stop playing making Simba whimper for a while when it’s put away.

I was born and raised in California, lived in Pennsylvania for several years, and have recently moved to Delaware. I have gone from being a teacher for 20 years to a blogger and now back to teaching but still blogging. I have a great dog named Simba. Simba is a German Shorthaired Pointer. Life with Simba is an adventure every day. I have had dogs my entire life but I have learned most about dogs living with Simba. German Shorthaired Pointers really do become your best friend. They become extremely attached and that is why they say they have the Velcro phenomenon. Simba now has a sister 8 years younger and her name is Gypsy.
View all posts by Simba's Mom →
This entry was posted in German Shorthair Pointers, Living with a German Shorthaired Pointer, Misc. and tagged bazook-9, best dog toy, best toy, dog toy. Bookmark the permalink.
Translate »