Remember Gypsy?  The puppy I adopted last November.  Next month she will be 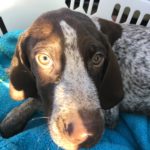 celebrating her first year birthday.  She has come a long way from being that scared and skittish puppy I drove home across three states.  As most GSPs she is very active but also enjoys her downtime more than Simba ever did.  My biggest issue is that she tends to get bored.  While I’m home, she enjoys playing with her toys.  They have a large toy box and she will pull out each one and play with it a while or get Simba to play tug-a-war with her and then she goes for the next one.  They also have a basket with about 50 chew bones which she tends to do the same with.  She also likes to annoy Simba when she tires of entertaining herself.  Simba likes to play when she feels like it and it’s not always when Gypsy feels like it.  The both get along beautifully.  They do play quite a bit, however, Simba is now nine years old and gets tired more.  When I am away from the house, it’s a whole other

story.  I come home to find all sorts of stuff torn up into teeny tiny pieces.  I have lost six pairs of reading glasses, pens, pencils, plastic storage containers, razors, loofa sponges, notepads and much more.  Other stuff like clothing or shoes, she doesn’t tear apart but will spread it out the entire backyard.  I have no idea how she manages to reach some of these items on the kitchen counters or the from the middle of the dining room table.  Then when she runs out of stuff in the house she starts to bring in branches

from the backyard and chews them into tiny pieces which she likes to spread all over the living and kitchen.  Although Simba went through some boredom episodes, she mostly suffered from separation anxiety, Gypsy just gets bored.  She is so curious and finds items that one forgets their even there.  Busy toys come in handy during the boredom times when I am away from the house.  I had to have several different ones so that I can rotate them through the week to prevent her from becoming bored with the toy.  My son also leaves his puppy frozen strawberries as a special treat that Jackson only gets when being left alone.  I also rub coconut oil on the inside of all the bones they have which are hollowed out.  I mentioned  they have about 50 so this also keeps her busy.  Over the last month or so, I have noticed a big maturity change in her.  She now knows when something she chewed up was a bad choice and I know by the way she drops her ears.  She has stopped finding ways to escape the backyard.  Let me tell you, she is quite the escape artist.  I listed some busy toys of which I have several!