Okay, it’s “Confessions of a Dog Trainer” time.  Sit is usually the first obedience cue we teach puppies.   And it is pretty easy to train.  At least that’s what I thought until I got Chase.  Chase The Super-Energetic, Chase The Easily Distracted, Chase The People Lover To An Embarrassing Extreme. 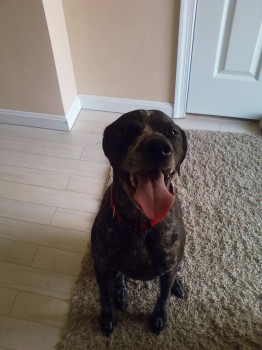 Oh, don’t get me wrong.  I taught Chase to sit when he was a puppy.  Well, the truth is, I started to teach him to sit.  Like sit to get a treat.  Sit to get dinner.  Sit to be let out (he often does this in slow motion because he is already pointing at what critter he imagines is in the yard).  But I never finished teaching sit.  He can’t sit and keep his butt planted for several minutes until I tell him to do something else (Duration); sit outside while surrounded by squirrels (Distractions); or sit when I am across the street from him (Distance).  I also need to work on other aspects such as: sit immediately so I don’t have to repeat myself; sit at the vet’s office (and other exciting situations); and sit from a lying down position.  Try that one.  Your dog might look at you like he’s never heard the word before.

Training a behavior is not complete until it is generalized to the extent that it is useful in different situations.   Generalization is accomplished by working on the 3D’s (Distance, Duration, and Distraction), as well as other elements of reliability like latency (speed of response) and body position (of the dog or handler).  You should work on each element, one at a time.  When increasing the difficulty of one element, make the other ones easy.  Progress gradually so your dog succeeds at each step.

For example, say your dog already knows how to sit for 15 seconds while in the kitchen standing 2 feet in front of you.  To work on distractions, you could practice with a kid walking around the kitchen, but reward after only 5 seconds (easy duration) instead of the usual 15.  Remain close to him to keep distance easy.  Gradually increase the difficulty of the distraction (like having the kid skip around the room without getting too close) while keeping the other elements easy.  If your dog makes a mistake (stands up), go back to an earlier step and proceed more gradually.

Humans are good at generalizing skills.  Learning math at school easily transfers to balancing the checkbook at the  kitchen table.  Dogs, however, do not generalize well.  Coming when called indoors is not the same as coming when called outside.  Every time an element is changed, you need to re-teach it in that specific context.  Sounds tedious, doesn’t it?  It IS.  That is why it takes 2 years to train a working dog (like a service or guide dog) and why they are trained in public places.

My clients often lament that their dogs are being stubborn or disobedient because they do not respond to cues that they learned in puppy class (usually “come” or “leave it”).  Understanding the concept of generalization can help owners avoid frustration and unfair punishment when the real problem is incomplete training.

Think about what your dog really “knows”, and see if you can expand his knowledge.  Can he sit politely to greet visitors?  I know Chase can’t, although he is usually good about keeping his paws off the person he is greeting.  He just stands up on his hind legs to get closer to the face (risking nose bops if the person is bending over to pet him), or he weaves and wiggles through the visitor’s legs.  At least he doesn’t crotch sniff.  I just haven’t invested enough time and effort into teaching sit in such difficult situations.  I have my work cut out for me if I want to claim that my dog knows sit.

I was born and raised in California, lived in Pennsylvania for several years, and have recently moved to Delaware. I have gone from being a teacher for 20 years to a blogger and now back to teaching but still blogging. I have a great dog named Simba. Simba is a German Shorthaired Pointer. Life with Simba is an adventure every day. I have had dogs my entire life but I have learned most about dogs living with Simba. German Shorthaired Pointers really do become your best friend. They become extremely attached and that is why they say they have the Velcro phenomenon. Simba now has a sister 8 years younger and her name is Gypsy.
View all posts by Simba's Mom →
This entry was posted in Training. Bookmark the permalink.
Translate »