Dog Food Guarding Prevention:  What Are You Really Teaching? 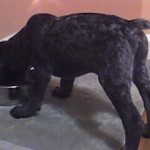 I see a lot of dogs that show “aggressive” behaviors for various reasons.  Most instances of growling, snapping or biting could have been prevented if only fair, non-punitive measures were taken before the issues arose.

There is one thing in particular that concerns me.   Every dog owner that I have met does the following to prevent food guarding.  While their dog is eating, they stick their hand in the dog’s bowl or take the bowl away.  If the dog is chewing on a bone, they take that away to teach him to tolerate such rude intrusions.  It is the lucky person whose dog puts up with such antics throughout his lifetime.  Of course there are some dogs that are fine with it.  But if the dog has a short fuse or a tendency to guard, watch out!  A dog that is harassed one too many times might say he has had enough already.  Punish the dog for getting annoyed and he will have two reasons to react negatively instead of one.

Why is it that we humans expect our dogs to never give a warning or express anger, yet we don’t have such high standards for ourselves?  It is natural for dogs to guard their treasured resources if they feel threatened.  We do it all the time.  We lock our doors, have alarms for our cars and homes, hold our wallets close to us, and grip our child’s hand firmly when walking down city streets.

Dogs are animals whose ancestors were hunters and scavengers.  Survival depended on getting enough to eat and not having one’s food stolen by other greedy pack mates.  The key to preventing your dog from guarding his food bowl is not to harass him while he is eating but to teach him that GREAT things happen when you approach and touch him or his bowl.  In my opinion, it is not good enough to expect a dog to just tolerate harassment.  It is far better to evoke a happy emotional response to the crazy things humans do, especially children.  But how do we do that?  First let me illustrate an unlikely but thought provoking scenario:

Imagine you are at your favorite restaurant enjoying a delicious gourmet meal (mine would be prime rib or sushi).  You are hungry and savoring every morsel when the waiter comes over, picks up your plate and sticks a fork into your food before setting your plate back down.  If you are a little inhibited in public like me, you might give him a dirty look or sternly ask him to stop (equivalent to a growl or lip curl).  If you are bolder or more impulsive, you might yell, slap his hand or even punch him (a snarl, snap or bite).

Now imagine that instead of the above scenario, the waiter coming over while you are eating and places a $100 dollar bill next to your plate.  Then he walks away.  He does this several times.  How would you feel about his approach the next time (assuming you find $100 bills very appealing)?  After a dozen approaches and $1200 later, would you smile every time he approaches?  I would (while I was eating).  The next time, he picks up your plate, sets it back down, and gives you $200. Wow.  $500 for a fork jab into my steak.  Heck, I’ll hand him my plate the next time he comes over!  Get the picture?  He only makes the exercise a little bit more annoying after he is certain that you welcome his approach.  And he pays you handsomely for it (and if he is handsome, that is a bonus!).

You can do something similar with your dog if he does not already guard his food. (If he is already possessive, it would be prudent to get professional help).  But instead of money, use currency that is highly meaningful to the dog, like generous chunks of roast beef or cheese.  The secret is to use what the dog loves.  And do the procedure gradually.  Start with a simple approach, drop (or toss) the treat, then immediately walk away.  Do this just once or twice at each meal.  It may take several days to get a very obvious “Yippee” response.  Take your time and don’t overdo it.  Increase the level of intrusion just a tiny bit after your dog is visibly happy when you walk up to him while he is eating.

Your approach becomes a predictor of wonderfully delicious morsels appearing in his bowl.  With repetition and time, he will look forward to you picking up his bowl during meals because you will add dessert.  Thus you have changed an event that could have been potentially threatening to a joyful one.  This kind of lesson is powerful and has lasting value, as long as you do nothing to violate your dog’s trust in you.

I was born and raised in California, lived in Pennsylvania for several years, and have recently moved to Delaware. I have gone from being a teacher for 20 years to a blogger and now back to teaching but still blogging. I have a great dog named Simba. Simba is a German Shorthaired Pointer. Life with Simba is an adventure every day. I have had dogs my entire life but I have learned most about dogs living with Simba. German Shorthaired Pointers really do become your best friend. They become extremely attached and that is why they say they have the Velcro phenomenon. Simba now has a sister 8 years younger and her name is Gypsy.
View all posts by Simba's Mom →
This entry was posted in Training. Bookmark the permalink.