My furry sibling, Gypsy has really changed since 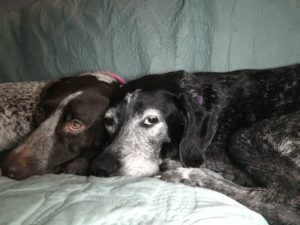 we’ve moved. She doesn’t destroy the entire house everyday while mum is at work. Although she slips once in a while. Yesterday, mum was home sick and she had just opened a new box tissues. While mum slept, Gypsy decided to decorate the ENTIRE room with snow. I think mum was too sick to be angry.  She just said, “Oh no.”  That was it! That’s all she said. She grabbed a piece of the snow, put it on her nose, rolled over and went back to sleep. Gypsy now sleeps with us in our bed. She likes to sleep under the covers too. However, she doesn’t seem to need a pillow so she goes down to the bottom of the bed and lays on mum’s legs. 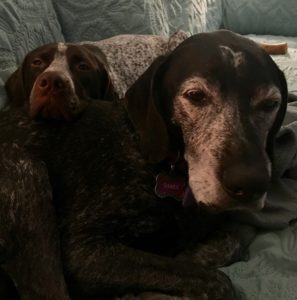 She started demanding equal time next to mum when we sit on the couch. Now, that is sometimes a problem. That spot next to mum has always been mine. Mum knows it, I know it, and Gypsy knows it (but pretends she doesn’t). She sits in front of mum making these pathetic howling sounds. She doesn’t stop and mum always ends up laughing and calling her over.  Gypsy doesn’t care that there’s no room. She just steps all over me putting her big behind down on my head if I don’t move. I still love her. ?

I was born and raised in California, lived in Pennsylvania for several years, and have recently moved to Delaware. I have gone from being a teacher for 20 years to a blogger and now back to teaching but still blogging. I have a great dog named Simba. Simba is a German Shorthaired Pointer. Life with Simba is an adventure every day. I have had dogs my entire life but I have learned most about dogs living with Simba. German Shorthaired Pointers really do become your best friend. They become extremely attached and that is why they say they have the Velcro phenomenon. Simba now has a sister 8 years younger and her name is Gypsy.
View all posts by Simba's Mom →
This entry was posted in Simba's Adventures and tagged german shorthair pointer, GSP, siblings. Bookmark the permalink.
Translate »