Luna is settling in quite well. It’s been three weeks since she joined us. I had forgotten how relentless they are in the puppy stage. All Luna wants to do is play and wrestle. Poor Gypsy get the brunt of it. Simba is now 14 years old. The old girl has slowed down quite a bit in the last year or so. Luna somehow knows this and does not bother Simba with her rough-housing. However, it’s Simba that she tends to want to cuddle next to for a nap. Gypsy, who is 6 years old now, has also slowed down not due to age but weight gain and laziness. Simba has always been a grazer and never has been all that interested in food. She is more interested in treats than eating her food. Gypsy on the other hand, eats everything in sight. She devours her food and then will happily volunteer to eat Simba’s food too. With Simba not playing as much due to aging, Gypsy has been putting on weight, even though I have been keeping Simba’s food away from her. The vet has her on prescription food and now Luna is making her move more. Although, most of the interaction with Luna is while she’s laying, I’m hoping she will begin to run around with her more as she drops the weight and gets her cardio back. When Luna plays with Gypsy, she makes all these strange noises which make her sound like a wild animal. After looking at the pictures of them playing, I realized she could definitely stand in for a velociraptor between the sounds that come out of her, the intensity in her play, and the look on herd face. 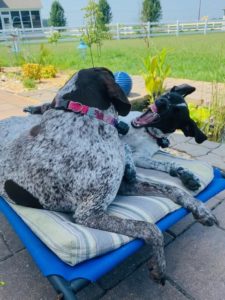 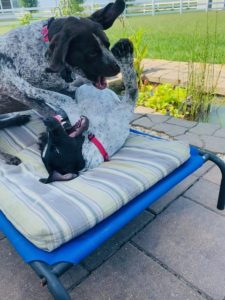 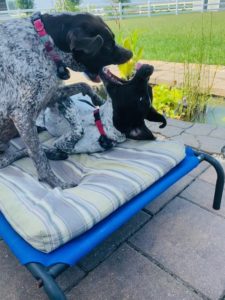 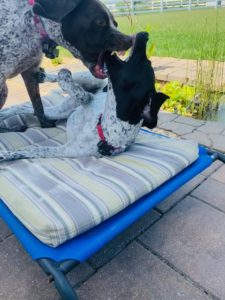 I was born and raised in California, lived in Pennsylvania for several years, and have recently moved to Delaware. I have gone from being a teacher for 20 years to a blogger and now back to teaching but still blogging. I have a great dog named Simba. Simba is a German Shorthaired Pointer. Life with Simba is an adventure every day. I have had dogs my entire life but I have learned most about dogs living with Simba. German Shorthaired Pointers really do become your best friend. They become extremely attached and that is why they say they have the Velcro phenomenon. Simba now has a sister 8 years younger and her name is Gypsy.
View all posts by Simba's Mom →
This entry was posted in German Shorthair Pointers, Living with a German Shorthaired Pointer, Simba's Adventures and tagged GSP, play, puppy. Bookmark the permalink.
Translate »