German Shorthair Pointers As Only Dogs

German Shorthair Pointers As An Only Dog

I brought Simba home 9 years ago.  I must say it has been a 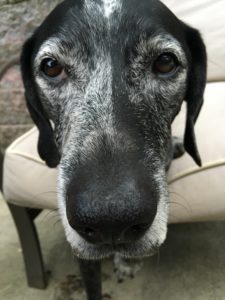 learning experience every step of the way.  I have had many breeds in my lifetime but none like the GSP.  The first lesson was that GSPs is a very high energy breed.  They aren’t kidding when you read that if they don’t get enough exercise they can be very destructive.  Another detail I learned is why they are called “Velcro dogs”.  Simba lives up to that label perfectly.  She is glued to my hip at all times.  It doesn’t matter if I’m outside, inside, upstairs, downstairs, in bed or in the bathroom; she is there watching over me.  Simba has hundreds of FB friends and one thing I noticed in pictures posted was that there was always more than one GSP.  There were usually two if not more and always huddled together. 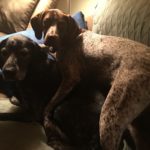 Even when sleeping, they seem to all sleep on top of each other.  For years, I contemplated with the idea of getting her a sister GSP to keep her company during my work day but I was worried that she would change.  Not that I wouldn’t mind some privacy when in the bathroom or getting dressed but I love how she cuddles up to me.  I love how she likes to sleep right up against me, I love that she can read my moods and acts accordingly.  I didn’t want any of that to change.  As you may already know, we adopted Gypsy one year ago because she needed a home.  This has been my observation having two dogs.  I would suggest that if you’re going to get two, 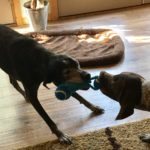 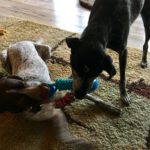 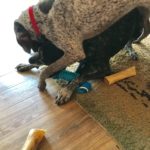 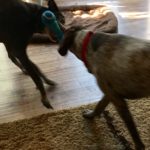 make them closer in age.  The nice thing is that I don’t have to worry about fitting in at least three hours of ball play with Simba.  Gypsy makes sure to keep Simba on her toes and running quite a bit.  Sometimes, it can be a little too much.  There is a great difference at this point in energy levels.  Gypsy has become very attached to Simba.  She wants to sleep on top of her.  She wants the same toy Simba is playing with. She follows her around and wants to be next to her.  Don’t get me wrong, I’m still her mum.  When the loud red monster trucks are screaming their sirens, it’s me she looks for to comfort her as she howls them away.  Simba is still behaving as the only child.  They say that the first-born of two children who are more than 5 years apart will grow up with characteristics of an only child.  I believe this holds true for dogs as well.  Simba still wants to cuddle with me, sleep with me, lay on me, play with me, sit with me and everything else she can do with me.  However, she does not let Gypsy lay on her or too close for that matter.  If Gypsy lays near her she will wait a few minutes and then move away.  Granted, Gypsy being a puppy has pushed all of Simba’s buttons and has exhausted her patience.  Simba will play with Gypsy for a little while but then brings the toy to me to play with her.  If I had to do it over, I would probably have kept them within two years of each other.  At least they would be similar in energy and play with each other a lot more.