I have a best friend.  His name isBombay. Bombayis a Weimaraner.   Weimaraners are a little bigger than German Shorthaired Pointers. Bombayis not only bigger but much thicker than I am.  I guess that would be normal, being a lady and all, I should be slender 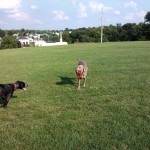 and sleek. He is all muscle and I do mean solid muscle.  Now to all the bitches out there, don’t be jealous, we’re just friends.  I have learned to be careful when playing around withBombay.  I don’t play chicken with him anymore.  One day, we were playing chicken, running towards each other at full throttle.  I was sure he would chicken out at the last second and turn off. 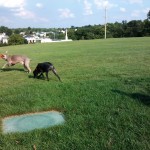 Well he didn’t!  BAM, face to face.  I shook it off and continued running around trying to be all tough and not cry.  I caught this look of terror on mom’s face as she ran calling me to her.  She kept trying to open my mouth, saying “Where is it all coming from?”  Her hands were covered in red and I thought that must be the awful taste I suddenly had in my mouth.  Yup, like a dummy I bit my tongue.  Now you may be wondering why I don’t just keep playing the game and be the one to turn away.  Ya right, I don’t think so.  I don’t lose.

I always go out with my ball or Frisbee.  WhenBombaycomes running over when he sees me.  I am very good about sharing my toys.  I drop my toy and he picks it up so that I will chase him.  Like most kids, I don’t like doing the chasing.  I want to be the one chased.  He picks my toy up, we stare at each other for a second, and then we each run the opposite way.  He thinks I’m going to chase him and I think he should chase me.  After all I did share my toy with him.  Mom laughs watching as we run away from each other.  Then we notice we’re not being chased so we circle back towards each other only to run the opposite way once again.  The entire time we’re running in circles.  I get a great workout when playing withBombay.  It takes me a couple of hours to cool down and recover from our play time.  But it’s worth it.  I love it.