Simba has always followed her gut instincts.  I have always been puzzled at how she likes some people but not others.  I don’t see a pattern at all.  It’s like she gets this vibe from someone and acts on it.  When she was young she didn’t like men too much.  She was almost afraid of them.  I couldn’t understand why.  I brought Simba home when she was almost 8weeks old so I assumed that she couldn’t have had bad experiences with men to promote this skidishness. She also doesn’t like children.  Through the years she has gotten much more accepting of men.  When we are out playing ball people love to come up to her. 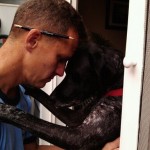 There are some people, including men, she will run up to and throw the ball at them and waits to play.  Then others, she explodes in this loud bark trying to act fierce.  Scares the daylights out of them and me for that matter.  She likes more people than not.  I would like to know what it is about the few people that she doesn’t like.  What does she sense?  Is it a smell?  A tone of voice?  A look?  Only she knows what her gut is telling her.  Afterall, we have all had the same gut feeling when we meet someone new.

I was born and raised in California, lived in Pennsylvania for several years, and have recently moved to Delaware. I have gone from being a teacher for 20 years to a blogger and now back to teaching but still blogging. I have a great dog named Simba. Simba is a German Shorthaired Pointer. Life with Simba is an adventure every day. I have had dogs my entire life but I have learned most about dogs living with Simba. German Shorthaired Pointers really do become your best friend. They become extremely attached and that is why they say they have the Velcro phenomenon. Simba now has a sister 8 years younger and her name is Gypsy.
View all posts by Simba's Mom →
This entry was posted in Living with a German Shorthaired Pointer, Misc. and tagged GSP and people. Bookmark the permalink.
Translate »