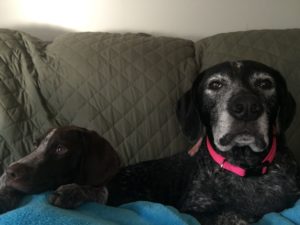 My puppy sister has been a handful.  I don’t know how mum has patience for her.  When she was smaller I taught her how to play with my toys.  I would bring one over to her and wiggle it over her face until she’d grab it.  Then I’d pull but she’d let go.  It took a few days to teach her the game of tug of war.  It was actually lots of fun for me to drag her around the entire living room.  She liked being dragged and learned to pull back too.  I warned her not to rip my toys because mum sends then to the hospital and they’re there for 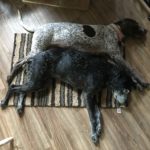 a long time.  With time, I felt myself get weaker and playing like this sometimes hurt.  I couldn’t drag her around the living room anymore.  Sometimes, my neck and mouth would get sore.  Mum said there wasn’t anything wrong with me, Gypsy was getting bigger and stronger.  Suddenly I noticed that mum was right.  Gypsy is as tall as I am.  I’m still a faster runner, ha!  She started to pull so hard that she 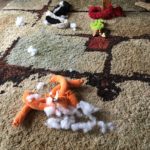 started to rip my toys.  I would stop and tell her mum would send it to the hospital to get fixed, but she wouldn’t loosen her grip.  She thinks she can actually win.  This is what happens when you don’t play nice, injured toys laying all over the place.  Mum would pick them up shaking her head saying, “Oh no, Gypsy.  Play nice.”  At first, Gypsy would try to pull them out of mum’s hands as she picked them up.  Mum says Gypsy is real smart but I think she seems to be a little slow sometimes. The morning the toys came back from the hospital, they looked all better.  But this is what mum found when she came that afternoon. 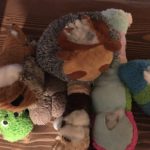 Mum looked so disappointed.  Her voice was louder this time as she said “No Gypsy, this is not okay.”  Gypsy still tried to take them from her hand again.  Jeez, are you kidding?  She doesn’t understand human or canine talk.  Where is she from?  The toys took a while to come back this time, so Gypsy found new toys every time mum was gone for a while.  Every time mum would get home and find proof of Gyspy play sessions, her voice would get louder and angrier. 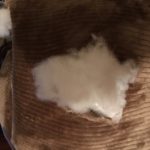 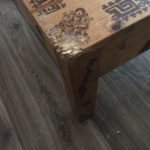 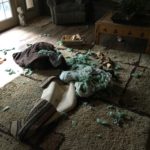 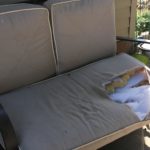 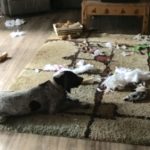 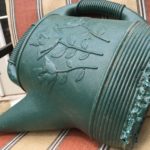 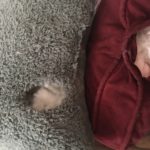 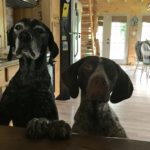 Then one day, I think Gypsy finally got it.  Because when mum walked in and exclaimed “Oh no!” Gypsy ran to her crate and didn’t come out until mum finished cleaning up and softened her voice.  Maybe, she does have some brains in that hard head of hers. Mum says she’s just a puppy and she’ll learn. When? Who knows! 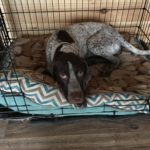 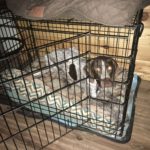 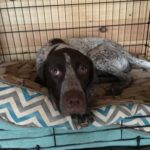 I was born and raised in California, lived in Pennsylvania for several years, and have recently moved to Delaware. I have gone from being a teacher for 20 years to a blogger and now back to teaching but still blogging. I have a great dog named Simba. Simba is a German Shorthaired Pointer. Life with Simba is an adventure every day. I have had dogs my entire life but I have learned most about dogs living with Simba. German Shorthaired Pointers really do become your best friend. They become extremely attached and that is why they say they have the Velcro phenomenon. Simba now has a sister 8 years younger and her name is Gypsy.
View all posts by Simba's Mom →
This entry was posted in Simba's Adventures and tagged bored puppy, GSP puppy, puppy destruction, puppy misbehaves. Bookmark the permalink.
Translate »