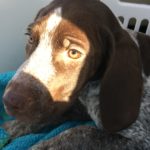 After a couple of months of Gypsy being home I noticed that she was beginning to scratch and nibble on herself more and more.  GSP’s are known for having more allergies than other breeds.  When Simba was younger, she too suffered from different skin allergies.  The next couple of weeks, I noticed Gypsy was beginning to show 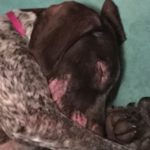 bare spots around her face and some spots on her back legs.  Gypsy was diagnosed as having Puppy Mange by her vet after performing skin graphs from a couple of areas.  Puppy Mange (Demodectic Mange” also known as Canine Scabies.  It is caused by mites that overpopulate on their skin.  WHAT?! EWE!!! I started itching myself instantly with thoughts of my hair falling out in patches.  The vet assured me that although the mites are transmitted from canine to canine they are not transmitted to humans.  All dogs have these mites and are actually transmitted to the puppy by their mother when cuddling with their newborns. As long as the dogs are healthy and have strong immune systems the body controls the population of these mites on their bodies resulting in no skin disease.  Since puppies immune systems aren’t as strong as a full grown dog it is more of a common ailment among puppies and 90% of cases resolve on their own without treatment.  Since Gypsy parents were not feeding her and her siblings proper nutrients she was suffering from a bit of malnutrition compromising her immune system.  She ended up with the generalized version of puppy mange which affects larger areas of the skin including the entire body.  Localized demodicosis is usually spotty patches only appearing on the face.  The generalized version can be quite itchy and may be a bit smelly.  The vet prescribed Ivermectin for Gypsy and pointed out that Demodicosis can take several months to clear and get under control.  The doses started small and increased slowly over the first few days.  One month later Gypsy went in for another skin graph. Although I could see no improvement yet except maybe less scratching, the vet stated that the population of mites had decreased but still not under control.  She was given another month of medicine with a higher dose.  After the second month, Gypsy was barely scratching and nibbling on herself.  Some of the patches around her eyes seem to be filling in slightly.  The new skin graphs performed by the vet confirmed the improvement.  She was kept on the medication for one more month making sure that these mites stayed under control for good.  Simba was not affected by the mites and my hair didn’t fall out either. 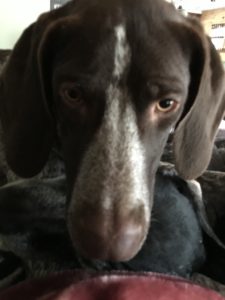 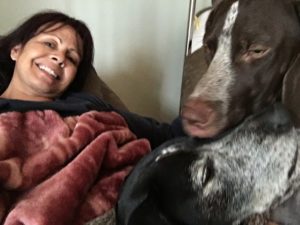