This Christmas I had to teach Gypsy many things.  This must be this puppy’s first 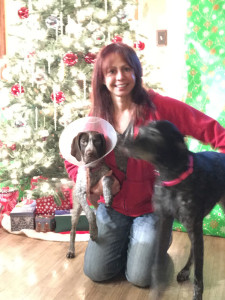 Christmas.  She was really good about not playing with the ornaments on the tree. However, about a week before Christmas she came home from the woof doctor with a funny looking cone thing on her head.  In her defense, she would forget about the cone when running past the tree and the cone would knock off the bottom ornaments.  She did pull my human sister’s gift out from under the tree.  I explained that was not hers; her gifts are in the stockings hanging from the fireplace.  She is still too short to feel the stockings for presents but she watched me as I poked each one and pointed out which ones were ours.  On Christmas Eve we got to open our presents one by 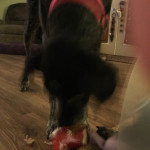 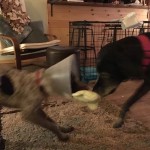 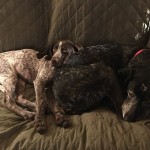 one.  Mum would give Gypsy her present to unwrap and then she would give me mine.  As soon as Gypsy saw mum hand me my present, she would drop her wrapped present and run over to take my wrapped present away.  Mum chased her around trying to get it back but that made Gypsy run faster.  I would open my present and then go over to show Gypsy how to unwrap hers.  Gypsy was more interested in playing with all the great toys that I had already unwrapped than unwrapping her presents.  I love unwrapping presents so I unwrapped them for her.  We spent the next hour playing tug-o-war with all our Christmas presents.  Having a little sister isn’t so bad sometimes.

I was born and raised in California, lived in Pennsylvania for several years, and have recently moved to Delaware. I have gone from being a teacher for 20 years to a blogger and now back to teaching but still blogging. I have a great dog named Simba. Simba is a German Shorthaired Pointer. Life with Simba is an adventure every day. I have had dogs my entire life but I have learned most about dogs living with Simba. German Shorthaired Pointers really do become your best friend. They become extremely attached and that is why they say they have the Velcro phenomenon. Simba now has a sister 8 years younger and her name is Gypsy.
View all posts by Simba's Mom →
This entry was posted in German Shorthair Pointers, Simba's Adventures and tagged christmas, GSP, GSP puppy, puppy. Bookmark the permalink.