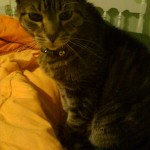 My feline brother past this morning.  It was a very sad time.  My human sister was sitting on the floor crying.  She loved him very much.  They were together for 18 years.  Mum ran back and forth between Lucky and my human sister.  I wanted to help make her feel better but mum pushed me out of the way and hugged her tight with tears rolling down both their faces.  I dedicate this poem to my human sister. 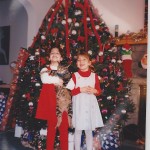 When tomorrow starts without me 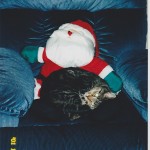 For every time you think of me

I’m right here inside your heart.

My human brother wrote his own poem too with the hope to help make her feel better. 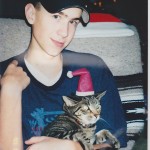 Lucky Sir Lucky had quite a lucky life

Our arrival at the pet pick-up was greeted with delight

He came home with a family but first had a stop

At the hospital where Zoe was given a shot

Where many adventures await

He was never alone

For his companions stayed near

And then came a new friend

Who is it, let me see

And out of the gloom appeared Nala

Who Lucky hissed at to show that he was angry

Over time they grew close

Trying to get through her fur coat

With Nala rolling her eyes saying “what in the heck”

From coast to coast

He puts on his sunglasses

Grabs his martini and coat

Off on the plane, he went to live with pops

And called a new shot

To return to the East

His old friend, his old foe, the beast

Only when he arrived

A tear met his eye

Nala was not there

Nala was not in sight

But Lucky had Zoe!

The best of best friends

He’s been on the internet!

Through Snapchat with friends

Lucky and Zoe were pals

Hanging out every night

He grew skinny and meowed

But was happy and snuggled tight

Now Lucky has moved on

Oh what a life he has lived

He’s had the best friends and family

But never any kids!

Raise up a glass

Hold it strong and high

Cheers to YOU Lucky!

As you look down on us from the sky

I was born and raised in California, lived in Pennsylvania for several years, and have recently moved to Delaware. I have gone from being a teacher for 20 years to a blogger and now back to teaching but still blogging. I have a great dog named Simba. Simba is a German Shorthaired Pointer. Life with Simba is an adventure every day. I have had dogs my entire life but I have learned most about dogs living with Simba. German Shorthaired Pointers really do become your best friend. They become extremely attached and that is why they say they have the Velcro phenomenon. Simba now has a sister 8 years younger and her name is Gypsy.
View all posts by Simba's Mom →
This entry was posted in Friends, Misc., Simba's Adventures. Bookmark the permalink.