I went to a huge dog party!  Mommy, Tom, Titi and I all went to PawsAbilities in Harrisburg, PA.  I was not happy on our way to pick Tom up because Titi took my seat.  I had to sit in the back all by myself.  I shared my unhappiness by whining the whole way to Tom’s house.  Once we arrived at Tom’s house, Titi sat in the back with me.  That made me happy.  I sat in my seat quietly looking out of the windows.  Titi was impressed at how nice I sit while the car is moving.  Mommy explained that I learned early on I can’t stand up while the car is in motion unless I want a close encounter with the floor.  We arrived and 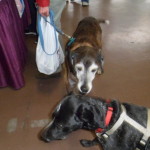 there were dogs everywhere.  It was so much fun meeting so many other furry friends.  All the dogs were very friendly.  We would meet nose to nose and say hello.  There were a couple of monster dogs.  They were big and looked like they were hungry so I didn’t offer my nose to them.  There were some lazy dogs too 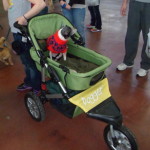 that didn’t want to get any exercise and chose to be carried or rolled around.  There was a gigantic bathtub where dogs would jump in after a tennis ball and then flop and slap until they got to the ramp where they could exit. One poor furry friend was so excited about the 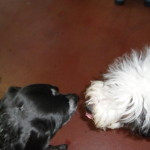 ball that he didn’t realize what he was getting himself into.  As soon as he hit the deep water he flipped a u-turn.  The look on his face was screaming FORGET THIS!!!  He hung on the side begging to be rescued.  He finally realized that the only way out was to swim to the ramp which he reluctantly did.  Augh, poor thing.

When his brother dove in, drops from his splash landed on my 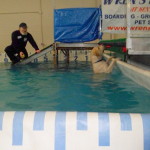 head.  That was wet enough for me and I ran the other way.  There were dogs racing against each other.  Their mommies would  place a tennis ball on a stand on the other end of their lane and tell them to go.  They had to run as fast as they could jumping over 3-4 hurdles, grab the ball and come back to 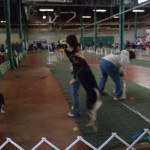 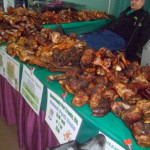 Now that looked like fun.  There were many booths.  My favorites were the treat booths.  I would get close enough to smell each treat but I didn’t touch.  I showed mommy which ones I liked and she bought me a couple to take home. My Titi bought me a real cool looking toy.  I call it spike.  A nice lady from 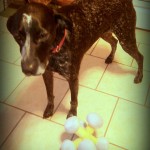 one of the booths gave me a red tennis ball to take home too.  This was just a great party.  I was exhausted by the end.  I could 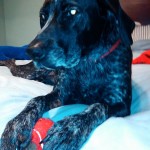 hardly hold my head up on the way home.  Once we arrived home, it only took me 40 seconds to re-shape the tennis ball to tiny little chunks and then I took a long nap.  It was a great day.