Train Dog Not To Pull

Train Dog Not To Pull

You know those dogs that pull hard, all the time no matter what lead or technique is used to train her to slow down.  Meet my sister, Gypsy.  She has actually pulled my mum off her feet 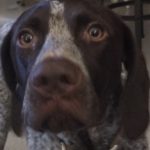 landing down on the payment with a thump.  The lead goes flying out of mum’s hand and only then does Gypsy stop, turns around to look at why mum isn’t playing pull anymore.  Mum has tried all kinds of harnesses and even tried a choke chain really scared her but not Gypsy.  Mum found this video and tried following the trainer’s advice for training a dog not to pull on a lead.  She took us out for a walk.  Every time Gypsy would start pulling, mum would stop walking.  Gypsy would make such a seen as she threw a tantrum.  She would howl and whine as if she was being tortured.  She would eventually stop her yelping and walk back to mum.  We would start walking again but only for a few steps before mum had to stop again and the whole noisy scene repeated itself.  The second day we went out for a walk took forever with all the stop and go.  The loud scenes stopped; Gypsy finally realized that got her nowhere. Every time Gypsy pulled mum stopped.  Gypsy instantly ran back to mum only to repeat the sequence.  It took 3 dog years to get back home.  Mum looked satisfied with the improvement made by Gypsy.  It only took one stop for me to understand what mum was requested and I stayed right next to her the rest of the way.  Mum stopped, I stopped.  Now hard is that to understand?  Well I guess pretty hard for 2 year olds.

I was born and raised in California, lived in Pennsylvania for several years, and have recently moved to Delaware. I have gone from being a teacher for 20 years to a blogger and now back to teaching but still blogging. I have a great dog named Simba. Simba is a German Shorthaired Pointer. Life with Simba is an adventure every day. I have had dogs my entire life but I have learned most about dogs living with Simba. German Shorthaired Pointers really do become your best friend. They become extremely attached and that is why they say they have the Velcro phenomenon. Simba now has a sister 8 years younger and her name is Gypsy.
View all posts by Simba's Mom →
This entry was posted in German Shorthair Pointers, Simba's Adventures, Training and tagged dog training, lead pulling, no pulling, pulling, train, training. Bookmark the permalink.
Translate »